How Does your Parenting Style Influence your Children?

Each child is born with his or her own personality, and it can be surprising to notice the character difference between siblings raised in the same household. But the fact remains that the family foundations on which they build will play a part in the shaping of their behaviour, social skills and ability to adapt to different situations. And the main influence over this environment is your parenting style! 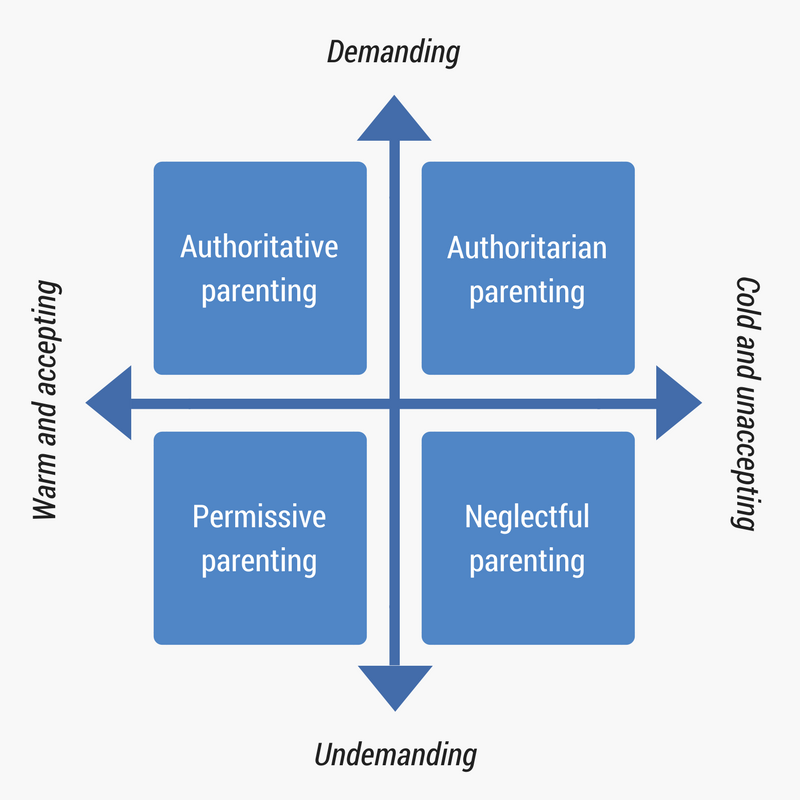 Several years ago, clinical and developmental psychologist Diana Baumrind investigated the link between parenting styles and children’s social skills using naturalistic observation of parent-child interaction. She is considered a pioneer in her field; the parenting styles she established laid the groundwork for several modern studies. Researcher have corroborated and built on her findings over the years, and still cite her work regularly.

Through her observations, she established that there are four different parenting styles based on two dimensions: the parents’ demandingness and responsiveness. Here is a breakdown of these four styles:

The foundation of authoritarian parenting is the respect of rules with limited room for debate on the child’s end. Compliments and encouragements are often replaced by rules and punishments. Children who grow up in such an environment tend to be shyer and less fulfilled; if they feel they are being treated arbitrarily, they may even become distrustful of their parents.

On the opposite end you have the permissive style, where mom and dad are affectionate and undemanding. This is possibly because these parents value self-expression or because they try to be friends with their child. When they want to establish a rule, they tend to discuss it with the child instead of imposing it (for instance, they will never impose a bedtime routine). This type of parenting often results in children who lack emotional maturity and control, since self-expression is encouraged over self-control. Decision-making becomes a great source of stress for these children; as a result, they aren’t as prone to exploration and, ironically, can be more dependant.

Baumrind established that the healthy middle ground was authoritative parenting, where parents set boundaries and expectations for their children. Although they remain unwavering, communication is always encouraged to persuade the child or explain a decision. Children who grow up in such an environment are better equipped to express and explain themselves in a constructive manner when conflicts arise. Growing up in a family setting of trust and security, they develop a sense of pride from gradually taking on more responsibility, which in turn leads to increased independence, curiosity and self-control.

Finally, some children grow up in an environment where parental affection is scarce, with very little set rules or boundaries; this is known as the neglectful parenting style. Since other aspects of children’s upbringing influence their future, growing up in a neglectful environment does not fate them to a challenging life. However, studies found that these children are more likely to struggle with introspection and will attempt―by several means that are not always appropriate―to obtain affection or test the limits of the socially acceptable. They will often become negative and impulsive. Despite a priori academic skills, their interest in school is likely to be affected. It is harder for them to build up self-assurance and confidence and, unfortunately, this is too overwhelming for them and could leave a mark.

Of course, it’s possible to analyze the various parenting styles from different angles. Baumrind herself emphasized the fact that although obvious, the correlation observed between parenting styles and its effect on children is not the only factor to influence their personality and behavior.

For those who wish to explore the subject further, many sources provide detailed explanations on the particularities of each of these four styles. Taking a step back and honestly self-assessing can be a worthwhile exercise; never doubt your ability to improve as a parent!