RESP, TFSA, RRSP: Which to Prioritize?

Although this news is positive and promotes the accumulation tax-free savings, the fact remains that the investment capacity of Quebecers continues to decrease. This situation is due to, among others, the rising cost of living and debt ratio, especially for young families. And with so many investment choices, families ask themselves which savings vehicle will give them the maximum return on investment?

Many financial experts and analysts have commented on the issue again this year and maintain that investing in a registered education savings plan (RESP) it the better option for parents. Yet according to a recent study by the Chartered Accountants of Canada professionals (CPA Canada), only 53% of Canadian parents invest in such a program. In Quebec, this percentage drops to 42.8%1.

The advantages of the RESP

Why should parents consider investing in an RESP before a TFSA or RRSP?

1. The government grants: In Quebec, both levels of government offer generous grants, increasing RESP contributions by 30% to 60% on the first $2,500 invested yearly. The grants combined with their earned income and that earned on the invested capital make this savings vehicle hard to beat.

2. Make your RESP go further: For a family with several children, it can be interesting to reinvest the capital withdrawn at maturity from a first child’s RESP (post-secondary education once initiated) in the RESP of a younger sibling to maximize government grants entitlements.2

3. Get the best of both worlds by reinvesting your capital in another savings vehicle: Depending on the type of RESP opened, once your plan reaches maturity or your child enrols in an eligible post-secondary program of study, all contributions to the plan are returned to the subscriber in full. You can then choose to reinvest this sum in your RESP or TFSA, thus benefiting from the advantages of a variety of investments.

The following chart* presents the advantages of an RESP investment vs. other types of investments. 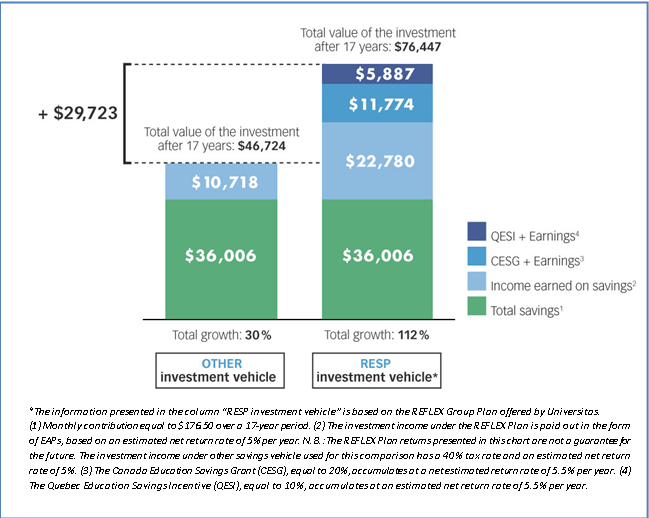 Keep in mind that the sooner you start saving for your child's post-secondary education (from birth ideally), the greater the amount available for his or her studies. Considering that it will cost $142,0003 to complete two years of CEGEP and three years of university in 20 years, it is better to start planning today!

However, if your child is older, that doesn’t mean you should cross the RESP off just yet. Given the important return on investment provided by the government grants and the fact you can catch up on unused grant entitlements from previous years, the RESP is still a very interesting option. You can invest a maximum $5,000 per year to maximize the grant amounts to which your child is entitled.4

2. Canada Education Savings Grant (CESG) of 20% to 40%. Quebec Education Savings Incentive (QESI) of 10% to 20%. Canada Learning Bond (CLB) of up to $2,000 per beneficiary, for children born after December 31, 2003, for whom the family receives the National Child Benefit Supplement (NCBS). Amounts based on adjusted family net income. Certain conditions apply. Refer to our Prospectus or contact one of our authorized representatives.

4. Certain conditions apply. Refer to our prospectus available at kaleido.ca for more information regarding this subject.

RESP: So your Kid Switched Majors...

Guide to Choosing the Best RESP Provider For You

RESP: A Gift That Imparts Values